Rolly first joined Elizabeth Rotary in January 1968 as the youngest member at 34 years of age. His early years in Rotary were spent in learning about Rotary, working physically hard for a younger community while along the way making lifelong friends in Rotary.

Rotarian Viv Valladares recently lead the Vocational Training Team (VTT) to Vanuatu in June 2015.  Dr Valladares spoke on ‘Voice of Rotary’ on Tuesday 18th August about the experience.  To hear her story please connect to these links. 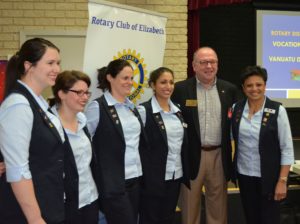 Our Rotary Club was pleased to support the Team Leader Rotarian and Dental Surgeon Dr Vivienne Valladares to the recent Vocational Training Team trip to Vanuatu in June.  We also sponsored one of the Dentists travelling with the team (Dr Agnetha Valladares) and hosted the Farewell Dinner at Elizabeth.

1314384 – Ron Watts was very proud of that number, his Rotary membership number.  Numbers for new members now are in the 9 millions.

Ron joined Rotary in 1984, in the two year old club of Munno Para.  He moved to the Elizabeth Club in 1987 and when the new Club of Playford was proposed in 1995 requiring experienced members, he became a charter member of that club, moving back to Elizabeth 5 years later.  Busy work schedules gave him a short break from Rotary and he re-joined Elizabeth Club in 2009.

Ron had many fond memories of those early days of Rotary, which were early days for the City of Elizabeth too. 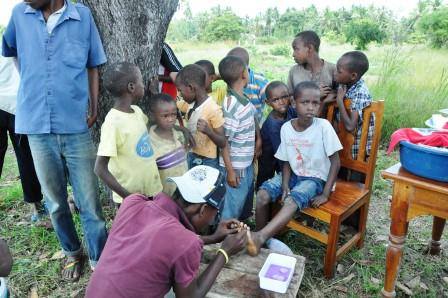 Early in 2013 the call to join a team of Australian Rotarians in Kenya at the site of a new orphanage was too great for local Rotarian Ron Watts to ignore.  Past President Ron with wife Delwyn travelled to the Umoja site meeting the rest of the team in Dubai at their own expense.