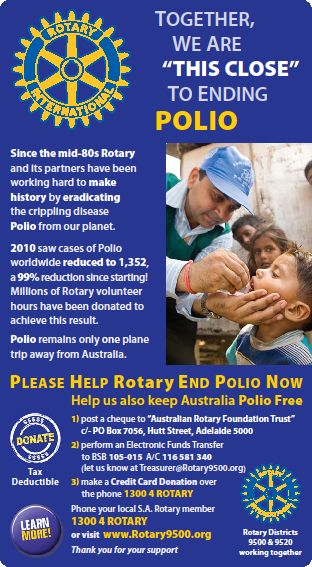 Major gains have been made in the fight to eradicate polio, Rotary’s top priority. In January, India reached a historic milestone by marking a full year without recording a new case of polio. The country has been an epicenter of the crippling childhood disease.

Worldwide, fewer than 650 polio cases were confirmed for 2011, less than half the 1,352 infections reported in 2010. Overall, the annual number of polio cases has plummeted by more than 99 percent since the initiative was launched in 1988, when polio infected about 350,000 children a year. More than 2 billion children have been immunized in 122 countries, preventing 5 million cases of paralysis and 250,000 deaths.

Also in January, Rotary leaders announced that Rotary clubs raised more than US$200 million in response to a $355 million challenge grant from the Bill & Melinda Gates Foundation. In recognition of Rotary’s commitment, the Gates Foundation contributed an additional $50 million. All of the resulting $605 million will be spent in support of immunization activities in polio-affected countries.

“We’ll celebrate this milestone, but it doesn’t mean that we’ll stop raising money or spreading the word about polio eradication,” Rotary Foundation Trustee John F. Germ told Rotary leaders at the International Assembly in San Diego, California, USA. “We can’t stop until our entire world is certified as polio-free.” 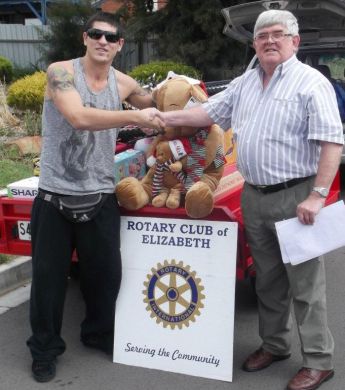 On 18th December 2011, the Christmas trailer raffle draw took place at the Grove Venue at 8.00pm.

The winner, pictured, was Brodie Hodgson of Modbury Heights.  President David, who presented the Trailer, said that the higly successful raffle would enable the Club to continue with it's programme of supporting community projects in 2012. 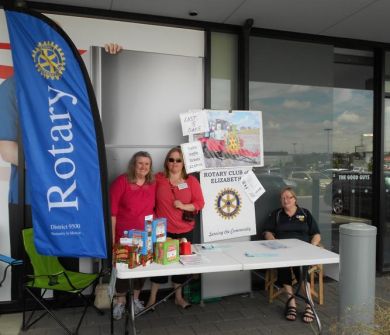 As the annual Christmas Trailer raffle draws to a close, members are selling tickets at Gepps Cross outside 'Good Guys'.  Family of Rotarians, Lyn and Jane with Rotarian Elizabeth are pictured ready for sales.