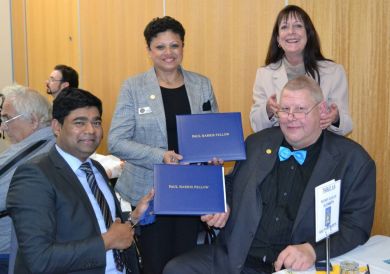 Elizabethy Rotary Club recognised two of its members at the Changeover on 29th June 2012.  Pictured is new Paul Harris Fellow Rotarian Viv Valladares with Marrianne Forrest (back row), with Rotarian Pandiyan Thevar and new Paul Harris fellow Jim Buckoke.
Below is the citation read at the event.

Our Club would like to recognise tonight a member of our club who has represented our club overseas twice,

A major club project for us this year for ROMAC was organised by Viv Valladares, who hosted a child from Bali with her mother for five weeks. Other club members provided support by taking Gayatri and her mother for a day out and about and the Balinese community also supported Gayatri, but the club owes a debt of gratitude to Viv as she carried the brunt of the responsibility. This was the second occasion that Viv has hosted a child.

We are delighted to recognise Vivienne tonight as a Paul Harris Fellow.

The presentation of Paul Harris Fellow recognition is The Rotary Foundation's way of expressing its appreciation for a substantial contribution to its humanitarian and educational programmes.

It is named after Rotary's founder, a Chicago lawyer who started our organisation with three business associates.

A world of peace and good will comes closer to reality today as Vivienne Valladares becomes a Paul Harris Fellow.

One aspect of our meetings which is always a highlight is the Sergeant’s session, which has been capably filled by Jim Buckoke for a good number of years. He has a special knack of picking up items about the members and delivering them in an always humorous and low key manner.

Jim has supported our Golf Days at Balaklava, he provided the beautifully made vinyl cover for our trailer and houses the trailer at his business, Jim's Trim.

He is always present at our barbecues, in fact the club would be a much lesser place without him. Thank you Jim for your support. We are proud to recognise you as a  Paul Harris Fellow.

The certificate states that you have been named a Paul Harris fellow , “in appreciation of tangible and significant assistance given for the furtherance of better understanding and friendly relations between peoples of the world.”

In becoming a Paul Harris Fellow, Jim joins a remarkable company of persons throughout the world, all recognised for their devotion to the ideal of goodwill, peace and understanding. It is the goal of Rotarians the world over, and one that Jim Buckoke clearly shares.