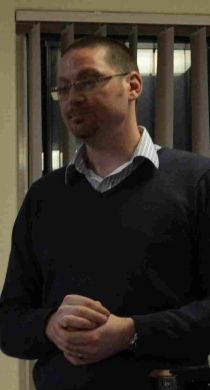 Daniel explained his work at Donate Life, and told us of the rewarding but difficult role of speaking to families who have recently experienced the trauma of a loved one dying.  He explained that donations need to be taken while the patient, though brain dead, is still hooked up to the life support system.

South Australia has recorded another rise in the number of people who have provided new or improved quality of life through organ and tissue donation.

Nationally, 337 people became organ and tissue donors, saving or improving the lives of more than 1000 of their fellow Australians.

The just-released 2011 Donation and Transplantation Performance Report shows the number of transplant recipients nationally hit a record high of 1001, and that the Australia-wide total of 337 donors was the highest number since national records began.

"The steady rise in our State reflects the generosity of South Australian families willing to give others a second chance at life through organ and tissue donation.

For further information go to www.donatelife.gov.au