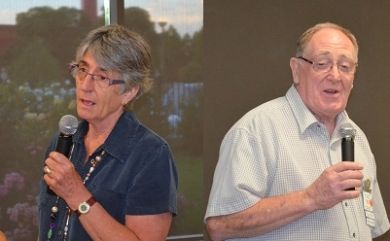 Past District Governor Roberta Waterman, RAWCS (Rotary Australia World Community Sevice Ltd) Board Member and Chair of the Central Region RAWCS Committee spoke to members of the exciting world community projects being carried out at the moment, and the opportunitiies for a club such as ours to be involved. RAWCS is involved in mainly overseas projects in principally health and education areas. PDG Roberta demonstrated her enthusiastic concern and involvement in her administrative role at RAWCS. Rotarians could not help but respond to her talk.

Club President PDG Alun Hughes spoke of his experience of working with Donations in Kind (DIK), our part of RAWCS in close proximity.  Donations in Kind is situated in Edinborough (previously on land occupied by DSTO).  DIK accepts donations of goods which can be sent overseas to Rotarians who can place them in areas of need.  Regular shipments of containers are sent, containing many objects such as used computers, hospital beds, school desks depending on the needs of the recipients.