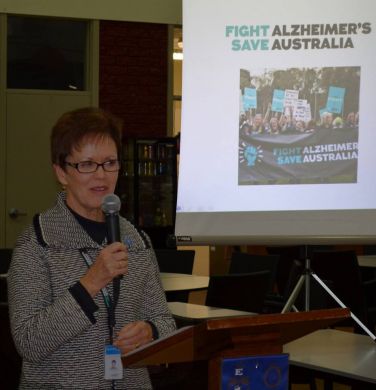 Guest speaker was Jenny Potter from Alzheimer's SA. Jenny had been carer for her husband who had had early onset Alzheimers for 9 to 10 years. Ralph had been diagnosed with early onset Alzheimers at the age of 55, and was put on medication to slow the progress of the disease. Jenny and Ralph were accepting of the diagnosis and lived positively with dementia, hoping that a cure was imminent. The…y took the opportunity to travel overseas and in Australia, Ralph attended his daughter’s wedding and his son’s graduation and saw him play in an SANFL Grand Final, and two grandchildren were born.

Jenny gave up her work and cared for Ralph as long as she could. This caused financial loss, the loss of friends and personal freedom. The last 18 months of his life were very difficult. They looked for an aged care facility, but it was difficult to locate one. There are a lot of services with age restrictions and those aged under 65 are hard to place.

Jenny and three other people formed Team TLC (Team Tender Loving Carers), to raise funds for carers. They provide retreats for carers to have a break from arduous care. The first retreat was to McCracken for 15 carers. It was an enjoyable and empowering weekend.
Jenny quoted Mother Teresa; “We are not here to do great things; we are here to do small things with great love.”