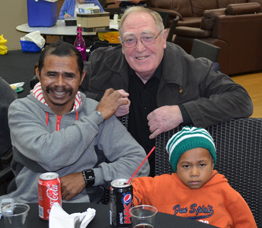 ROMAC’s mission is to provide medical treatment for children from developing countries in the form of lifesaving and/or dignity restoring surgery not accessible to them in their home country.

Tomas Bere was diagnosed with a Wilms Tumour based on X-ray and CT scans and accepted by ROMAC, (Rotary Oceanic Medical Aid for Children) for life saving treatment.

When Tomas arrived in Adelaide almost three months ago, further tests conducted by the doctors at the Adelaide Women’s and Children’s hospital showed that the ‘lump’ attached to his kidney was not a Wilms tumour that is relatively easy to remove. It was a rare type of cancerous tumour that was going to require long term extensive radiotherapy and chemotherapy after the surgery.

Firstly Tomas’s tumour was shrunk with chemo-therapy to enable surgeons to operate and remove it safely. The operation was carried successfully three weeks ago. This was followed by radiotherapy and the chemotherapy treatment has just commenced. As chemotherapy and blood tests are carried out every day Tomas needs to be close to the hospital and will have to remain in Adelaide at least until December, a total time of 6 months instead of the original expected 4 to 5 weeks.

The changes in circumstances means that support for Tomas and his father, currently being accommodated at Ronald McDonald house, are continuing through the financial support of various Rotary clubs and visits from individual Rotarians and friends. Our Club has recently been supporting ROMAC with financial donations, along with the Rotary Club’s of Brownhill Creek, Morialta and Magill Sunrise. We strongly encourage other clubs to support the work of ROMAC with generous financial donations.

Past District Governor and club member Alun Hughes has taken on the role of Acting Central Region (Districts 9500 &9520) Manager for ROMAC caused by the illness of the current manager Oleh Bilyk.  It has been an unexpected role for Alun, combining it with his family, Rotary and other volunteer commitments. Alun has had to cope with language difficulties as Mariano has no English, liaising with medics, translators, the hospital and Ronald McDonald House staff. He has also had to arrange visa extensions until January 2014 for both Tomas and Mariano as the initial three months visas were no longer adequate for the extended treatment time. In addition Alun’s role in replacing Oleh Bilyk, be it only temporary, has meant speaking to Clubs and attending meetings on behalf of ROMAC.

The changed circumstances of Tomas treatment, adding 3 to 4 months time in Australia, along with the associated increased medical, accommodation and cost of living expenses for ROMAC,  have now been complicated by Tomas’s family situation in Timor Leste. The family home has been destroyed by a mud slide and the much needed support for Mariano, Tomas’s father, has now significantly increased due to the stress he is under from his family at home.

More information on ROMAC is obtainable at http://www.romac.org.au/