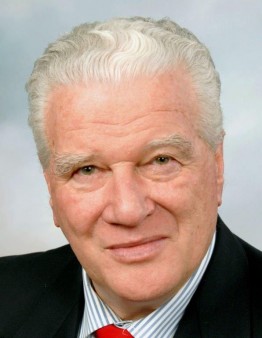 1314384 – Ron Watts was very proud of that number, his Rotary membership number.  Numbers for new members now are in the 9 millions.

Ron joined Rotary in 1984, in the two year old club of Munno Para.  He moved to the Elizabeth Club in 1987 and when the new Club of Playford was proposed in 1995 requiring experienced members, he became a charter member of that club, moving back to Elizabeth 5 years later.  Busy work schedules gave him a short break from Rotary and he re-joined Elizabeth Club in 2009.

Ron had many fond memories of those early days of Rotary, which were early days for the City of Elizabeth too.

Ron was very proud that his four children were Rotary Exchange Students:

But it didn’t stop there, Ron and Delwyn hosted overseas exchange students in their home and Ron mentored others as well.

Over the last few years Ron used his business acumen to maximise the profits (and not to mention the pleasure) of projects within the club.  One such example was our barbecue trailer which had only been used for several events during the year – Ron decided that our investment in the trailer required us to put it to better use.  Seeing an opportunity at Bunnings we were persuaded to try first a Sunday, busy but very profitable, and then a regular Tuesday on a fortnightly basis for 6 fortnights.

We continue, as it has been an unbridled success.  Ron wrote the manual of procedure so that anyone could set up and achieve continuity, and each time we have operated there we have increased sales and always sold out of food so there has been no waste.
One cannot forget Ron and Delwyn’s trip to Kenya to support a RAWCS project.  RAWCS is Rotary Australia World Community Service and the project is to set up an Orphanage village called Umoja, Swahili for unity and togetherness, taking from the Kenyan proverb, “It takes a whole village to raise a child”
Ron caught the fire when reading of the project of Sunrise Rotary Club, Bundaberg, and he and Del set off at their own expense to spend time in Kenya.  Funds raised through the Club which they took with them provided side gates to the perimeter, and Ron and Del helped to build the surrounding fence on the property as part of the second volunteer group to visit Umoja.  Ron’s dream was to take a group of Rotarians, teachers and some senior school children to experience the nature of giving, with Rotary’s motto, Service Above Self.
Ron was a mentor to all of our members – that ‘can do’ positive attitude, or ‘we can try anything as long as it is reasonable’, encouraged us all to achieve success in our endeavours.

Ron’s knowledge of the community of Playford has meant that we have been involved in many local events like Clean Up Australia on Main Nth Road, or the Christmas Pageant, where Ron organised the Rotary float with some oversized fairies and a trailer full of excited children.

Ron was eagerly looking forward to our fiftieth year when he was going to be our President once again.  He has maintained our archives so that amongst our celebration there was to be some reference to our history, and we are planning some very special projects for that year.

We shall do them proud in Ron’s memory.